I bought my 1972 Triumph Stag in April 1983; the first MoT I obtained in July 83’ shows a genuine 32,370 miles. I bought it from a work colleague who in turn had bought the car about two years earlier as an investment, only to find that the Stag was fast becoming unloved by the public. He used it for around six months and then garaged it until finally coming to the conclusion that it must be moved on. I took it for a long test drive noting that the engine was rattling, the hood torn and faded, the exhausts rusted through and then…. ran out of petrol! However, it was a car I had loved from the day I saw Tony Soper driving one through the Scottish Highlands on one of his TV wildlife programs of the early seventies. Seeing one in the flesh and hearing the wonderfully laid back V8 burble only reinforced my desire to own one and so none of this put me off the purchase; my mind had been made up years ago.

I replaced the timing chains, exhaust (the stainless steel replacement is still on the car) and hood (subsequently writing up the hood replacement in 1985, for issue 66 of the SOC magazine) and had the paint refreshed by a local spray shop in Belper, Derbyshire. I also stripped off all the underseal and repainted the underside and wheel arch recesses with bitumen type paint, followed by waxoyl. Six months later I had the automatic box rebuilt by a Borg Warner specialist after the clutch plates started slipping. For the next two years the car ran very well, but I had noticed that the oil pressure was low, almost non-existent on tick over. In 1986 I had the luxury of a Nissen hut for a garage and so I removed the engine and rebuilt the bottom end, replacing the crankshaft with a Tuftrided version. After this the car ran until 2000 when, at 104,000 miles and over a two year period, I carried out a top end rebuild as one of the heads started to blow and so it was an ideal time to have hardened valve seats inserted in order to run on unleaded fuel. I also had the automatic gearbox rebuilt again, as it was always leaking fluid. In 2004/5 I had a back to bare metal re-spray after overhearing a conversation between two motorcyclists waiting behind me at a set of traffic lights in Bath. “Great car” one said to the other. “Yes, but s*** paintwork” replied his mate! Having attended to the exterior, I turned to the interior and re-veneered the instrument panels with burr walnut (recycled from my neighbour’s wardrobe doors) and fitted new wool carpets. The original front seats were replaced with black leather SAAB 93 seats, matching perfectly with the dash and centre consol which I had re-covered in black leather. 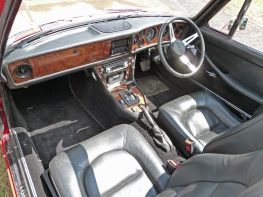 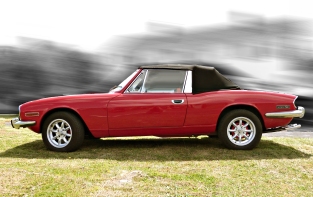 I also treated myself to a set of Minilite replica wheels taking the wheels up to 15inch diameter. Having run without a hood since 1996, I finally had the hood frame shot blasted and powder coated before re-assembling (with thanks to Colin Brookes for letting me use his car as a reference) and fitting a new mohair hood in 2014. The next major job will be to rebuild the hardtop which is badly rusted.

Between 1983 and 2000, I ran the car almost as a daily driver. However, winter would generally tend to see less frequent use and, after 1994 I began to use the car only at weekends and in fine weather, so annual mileage dropped to between 2k to 3k. Since the re-spray I have been very protective of the car and annual mileage is down to between 200 and 1000 miles. Over what is approaching thirty two years of ownership I have amassed many wonderful memories of spirited driving throughout the West Country and the Midlands. The photograph below was taken around 1987 and shows a nephew and niece in the car at Burrator Reservoir, S.Devon. In June 2014 we re-created this photograph showing the four of us in our current guise; I am the only one who seems to look worse for the passing years! 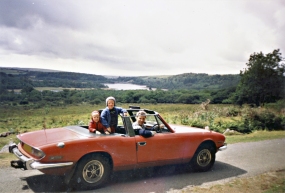 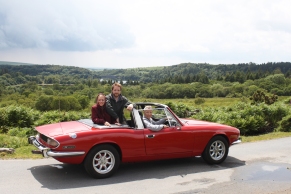 Throughout its time with me, the car has been a genuine ‘bird puller’, often used to transport my birds of prey. As from the late 90s onwards saw the car used without a hood or roof, the birds were on open display, either on a perch bolted in place of the front passenger seat, or on a cadge secured in the rear seat well. One of my peregrines used to particularly enjoy the ride; perched on the cadge in the rear, as I increased my speed she would stretch out her wings and, without any wing beats, ride the air currents. However, after several years I decided I should stop this after the driver and passenger of a car travelling alongside us on a busy dual carriageway were so distracted by the sight of the peregrine that they collided with the car in front. 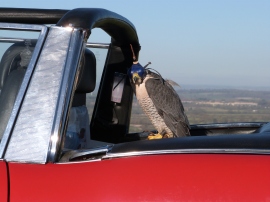 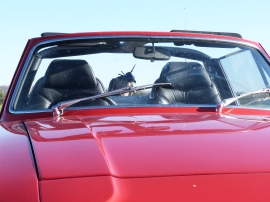 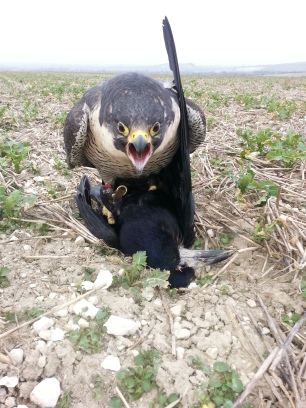 The Stag is very popular with my nephew and nieces and has been used as transport to a school prom’ and a wedding car. Providing the weather is good, it is ideal as the couple can sit on the hood stowage cover and hold on to the ‘T’ bar as I drive the last few hundred meters. 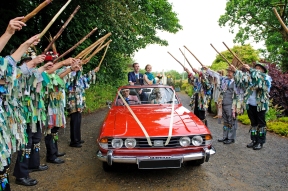 I don’t visualise selling the car and with luck I might still be around in twenty seven years time and we can then recreate these photographs, however, I will probably be the passenger rather than the driver. 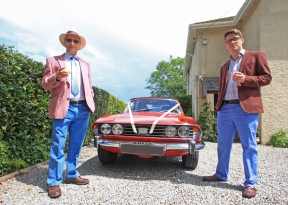 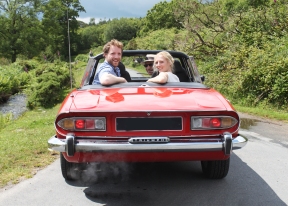 Thanks to Donald Peach for his story and wonderful pictures in this article.