Having owned our stag for fourteen years and also owning a TR5 and TR8 we decided on a sensible day to cut down our car collection so sold the TR8 and the Stag  BIG Mistake  we wished we had kept them both.

However Helene really missed her Stag, funny how every time I turned on her computer it was left on “stags for sale” ? So in 2013 we bought bluebell a Tahiti blue auto Stag. 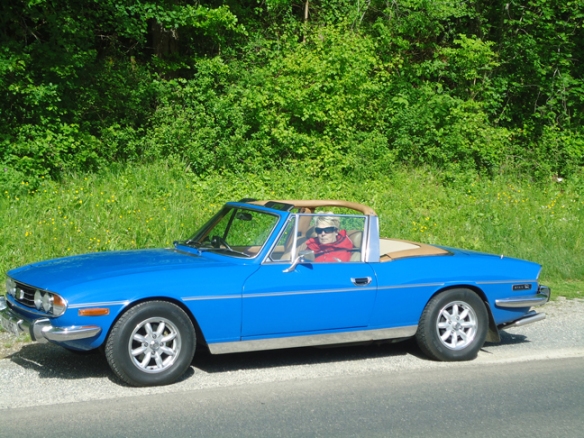 I am no mechanic but we like everything as it should be and tinker so all the lights work, doors click etc.

The only major thing we had done was a Tate and Lewis gear box, not cheap but wow it transforms the car to a wonderful long distance cruiser.

We usually do a European tour each year, but in the TR5, this year we did it in the Stag (Bluebell )

Always staying our first night in St Omer to get the feeling of France we travelled through the centre of France taking the scenic routes down to Orleans on to the Dordogne and Sarlat for the Saturday market. 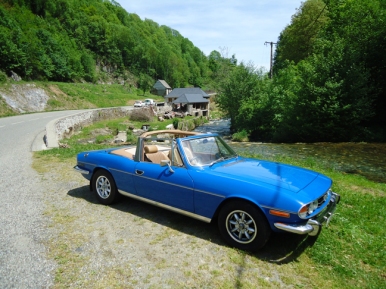 Then on to Carrcasonne we crossed into Spain for for a night in Viella travelling along the Spanish Pyrenees, seemingly all to ourselves the roads were smooth and completely empty.

We took a rest in Birritz for a couple of nights then travelled up the coast to La Rochelle. It happened to be the National 2CV rally that weekend we joined them on a large roundabout lots of tooting , waving etc

2CVs may be small but boy they can make a lot of noise, Also by chance the Red Bull cliff diving challenge was in town diving off one of the harbour towers, the place was very much alive.

Then onto Dinan, Port Bessin, Honfleur and then home.

Now for the most important bit.

The only problem was we took several CDs to play but only listened to the wonderful sound of the Stag.

Thank you John & Helene Dennison for sharing your wonderful trip with us all!!