I must have had too many shandy’s one night last year as I suggested to a couple of buddies that we should do the Laon Historique. I’ve read great reports on this event in this mag and elsewhere so it was booked with a MG Midget and Lotus Elan in mind as fellow tourists. Sadly the Elan hasn’t quite finished its rebuild but no matter we were booked and raring to go. I’d been to the Le Mans classic accompanied by Tim in his classic MG Midget a couple of years ago and really enjoyed the trip as much as the event so even though the prospect of a c800 mile round trip was daunting it was equally exciting. We did though consider having the odds stacked a little better in our favour and elected to travel from Hull to Zeebrugge overnight and cut out the long boring motorway miles in this country. This seemed a great idea and as the event drew closer it was made better by colleagues from Cleveland and Durham also doing this trip.

The initial journey over the Yorkshire Wolds was pleasant but with a couple of the bigger hills it was me who had to have the bonnet up first as MEF just wasn’t performing well uphill. A cursory inspection soon showed a plug lead off…so no dramas there. Plug Lead replaced we resumed our journey, thankfully on 8 cylinders rather than 7 !

Once out of the port in Zeebrugge we’d somehow got split up so a few hurried phone calls and we had a rendezvous at the first petrol station…where else ! Resuming our journey it was fairly uneventful through the initial flatlands of Belgium until we came to a road closed and Tim indicated it was his turn for a problem. It seemed that his brakes and clutch were becoming very unresponsive and all fluid appeared to have escaped somewhere, but from where ? There were no obvious traces on the road but something wasn’t right. We eventually found a garage and tried to explain our predicament, but even though the fluid was topped up this didn’t solve the root cause of the problem. Unbelievably the garage mechanic explained he had a colleague who restored classic Triumph’s and MG’s and he was only 10km away !! Even though it was a Friday afternoon with many miles ahead of us we continued undeterred to get the problem fixed. The garage itself was superb, the garage owner clearly knew his stuff and getting the car on the ramps showed that the problem was a broken brake pipe where it entered into the slave cylinder. An hour later and we were fixed on rolling again. It did just give me enough time to look at the classic Austin Healey 3000’s that he had along with classic Jaguars and Triumphs.

Saturday dawned bright and clear and we met up with Ron Davey from SOC Herts who as well as being a real gentleman is a seasoned foreign traveller and was able to give us some top tips on the weekends activities. Vehicles at the Parc-Foche where we met at registration were superb – such a variety of cars from classic super cars like the De-Tomaso Pantera GTS to the 1914 14.5 litre 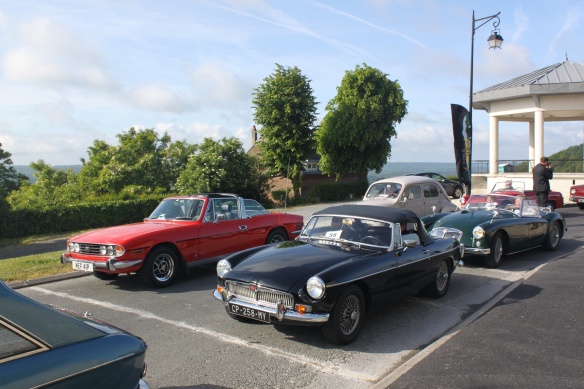 Simplex chain driven car. Then we set off on the recommended tour. Being driver and navigator was not something I relished so we elected to follow 2 gentlemen of a certain age <ahem> who were driving a classic open top Bentley. Surely they would find their way around…..alas it was not to be – they turned into the Hotel car park, which meant car number 2 expressed his alarm over leading a group of classics on a 140 mile tour around !! Sure enough, we drove round and round until Tim pulled over and lead our little convoy which by this time was just 4 of us, the Midget, 2 Stags and a Lotus Elite Turbo. Soon we were making great headway and polling along quite nicely top down and seeing fantastic scenery and classic cars. 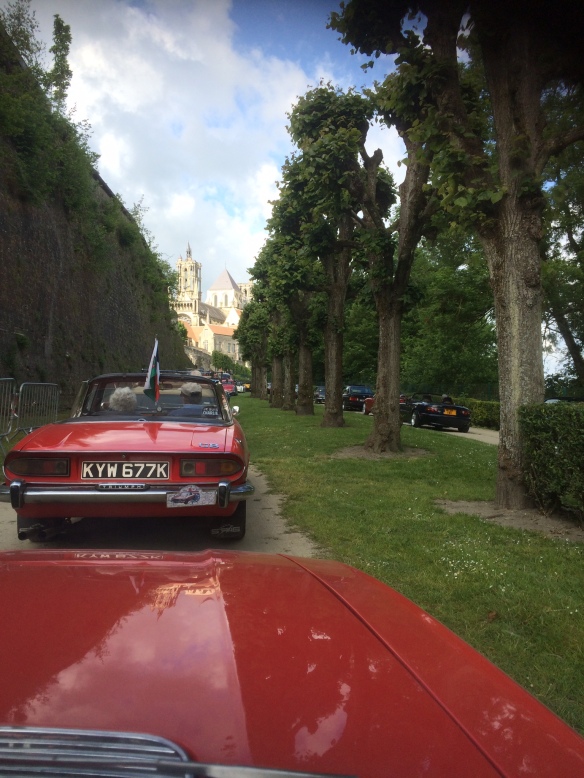 Lunch was held at a beautiful chateau where everyone congregated before setting off for the return trip to their hotels. At designated stops along the way eager locals were happy to offer bottles of water and other gifts, sunglasses, newspapers, chargers, and even a bottle of delicious local cider. If a route turning wasn’t 100% clear there was usually a local who popped up indicating the route and on most roads in the countryside local children were usually on hand with cameras or mobile phones taking videos and pictures etc.

Saturday evening the three of us Roy, Tim and I returned into Laon for an evening meal with our colleagues from Cleveland and Durham SOC where we had a really pleasant meal and sampled a little of the local produce !

Sunday morning wasn’t quite such good weather for the closed roads circuit of the town but the sheer spectacle of so many classic cars from simple 2CV’s to the more exotic and expensive was great to see and participate in. I must confess that after a couple of laps of the circuit though Tim and I elected to take a short tour to the old Reims motor racing circuit where en-route the weather seemed to clear up for us. Although Reims circuit hasn’t been used since the early 1970’s most of the buildings and grandstands are still there and for confirmed petrol heads like us it just had to be done ! Another fine evening was spent in good company with our friends in Laon sampling the fine wines and local produce (you can never be too careful !)

Sadly though all too soon the time came on Monday morning to head back North – we naturally elected to take a more scenic route staying off the motorways and whilst MEF was performing well, my overdrive noises suggested not all was happy down there. Eventually we reached Bruges and called in for an hour or so doing a quick tourist thing before heading back to Zeebrugge for the ferry home.

We had an absolutely fab time and I’d be looking forward to doing it all again.

Thanks Andy Mathers for sharing your trip with us.