One weekend we decided to take the plunge and begin the process of replacing the exhaust from end to end. We had purchased the exhaust a while earlier and now it was time to take the hole ridden rot box off the stag and put the shiny new exhaust on. 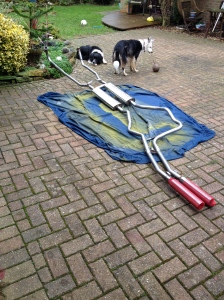 With the exhausts approved by the dogs we loaded the stag on to the car lift and began what would turn out to be a long a drawn out process.

Once the stag was on the lift we could get a full look at the state of the exhaust and it was not pretty, between holes, rust and brackets falling off it made it an interesting adventure. 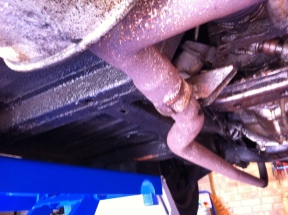 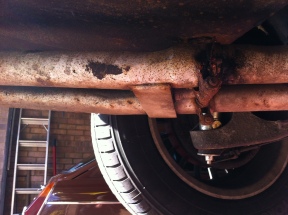 Could that be a hole

Have now seen the state of our exhaust we started by getting the nuts off the manifold end of the exhaust, well, we tried, 5 out of 6 nuts said yes but there is always the one that says no, and boy did it say No with a capital N. 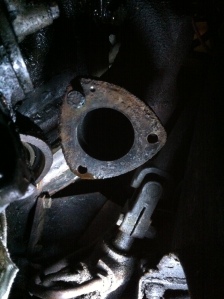 These will get it out

When i said it said no, i mean it would not budge when we asked it nicely, hit it, used a socket set, bought and used nut extractors and finally swore at it – this thing was not for moving. We spent several hours using a junior hacksaw cutting round the bolt in the exhaust to see if we could get more purchase one the delightful little treasure.  After many hours of trying to get the bolt out we put in a call to friend with a welder who reckoned that we could possibly weld a nut on to the bolt and this would allow us to get some more purchase on the nut.

So, one cold january saturday morning our friend appears with his welder in the boot and Jules was wandering around like a kid in the sweetie shop wanting to have a go with the welder. So up went the stag yet again, welder was plugged in and 2 little goblins were sat under the car full of intent and optimism. At this point the the welding started and slowly over the coming hour the the colour of the air began to turn blue as the nut would weld to the bolt, but the bolt was not for budging.

After a couple of hours of trying to weld something, anything to the bolt to get it out we had to admit defeat and discuss the options, of which there were only 2, our friend goes home and gets their plasma cutter and we cut it out or we drill it out – out came the drill!

Up bright and early on the sunday morning to begin by removing the remaining parts of the exhaust left on the car from saturday and started the process of putting the new exhaust on to the stag, but first we had to find a bolt that would work with the new hole drilled out on saturday, and with this new bolt in place we begin the tricky job of getting all the parts lined up.

First to go on are the brackets to support the exhaust just before they go thru the cross member, and then the great threading began starting at the manifold end and then gently bolting up the each part loosely to allow us flexibility to nudge the exhaust in to place.

and with the shiny new tail pipes looking and sounding great our work here was done part from filling her back up with oil and running her in. 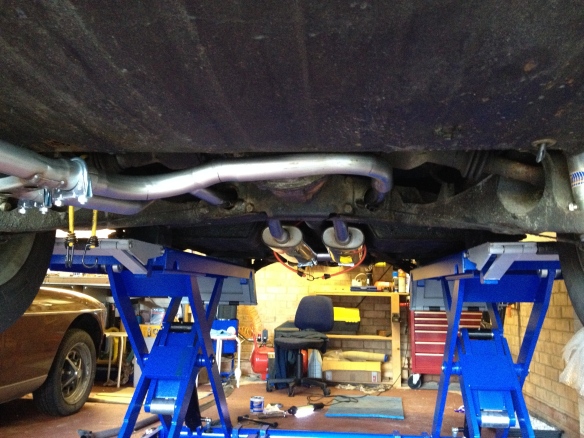 A lot easier with a lift

I am pleased to report that despite a small mishap with the oil filter the car is running well and sounds great and with everything copper eased should we need to do this again everything should come apart easier, all i have to do is a small trip to the tip to find the old exhaust a new home.

The old one out on the drive

PLEASE NOTE – these are NOT instructions on how to undertake this job just some pics and words of our experiences, always consult professionals when undertaking any repairs or restorations. (please refer to the disclaimer on our about page)